On March 15, 2021, VOIS Cyprus was represented by its dear Representative Maram Laouar, on a Turkish language Web TV titled "Off The Record", organized by the Giynik Web TV of the Giynik Newspaper, which discussed the issues International Students in the TRNC face, alongside other issues, with other participants such as the President of the Federation of UK Turkish Cypriot students, Adil Bey, and a Board member of YODAK (the body governing higher education in the TRNC), Prof. Dr Hüseyin Uzunboylu.

Some of the points mentioned by VOIS highlighted:

🚀 Challenges for international students with the health system:

This is often due to the lack of English speakers in the hospitals, as well as the relatively poor quality of service in the public hospitals, when students visit with their concerns.

This encompassed the lack of English speaking psychologists/ therapists in the TRNC. The private ones are often expensive, as well as the lack of effective communication and institutional support.

Many employers do not obtain working permits for their student employees, as required by the law.

Many landlords do not refund the deposit of the students after the conclusion of housing contract. The contracts are often only in Turkish, and the demand of an upfront rent fee of 1 year is problematic for the students, who need to factor in other expenses at a time.

Overall, many students lost their jobs due to the pandemic, which led to a wave of hunger and certain financial struggles.

The Labour and Social Security Ministry of the TRNC, launched a food relief program, that we are immensely appreciative of. However, it had quite a few setbacks, where so many had to wait for a while for the receipt of their packages, and more. We also pointed out that many students are still facing financial struggles and hunger.

During the lockdown period last year, official statements by the authorities that were important for the public, were often in Turkish, and VOIS Cyprus was almost the only way for many international students to learn about the new regulations and decisions. In recent times, many outlets are assisting these efforts. We hope for more inclusiveness.

🚀 Our kind request to the authorities regarding the pandemic:

🚀 The President of the Federation of UK Turkish Cypriot Students mentioned some of their challenges, which had a lot of intersections with the problems of international students in North Cyprus. A few included:

The program involved discussions about the importance of taking care of all citizens and residents in North Cyprus, especially during the pandemic, and to take into consideration the problems they face including the unclear vaccination program.

The desire of these associations and organizations in cooperating with the TRNC authorities to make an impact, was also highlighted.

Mr Hüseyin took the points and inquiries positively, and mentioned the importance of acceptance of the international students, by local population, urging them not to stay away from engaging with International Students, and not to treat International Students as guilty people. He promised to arrange a meeting with the VOIS Cyprus' Administration this week.

We thank the Giynik Web TV of Gıynık Gazetesi for having us, and giving us a platform to engage in these important discussions! 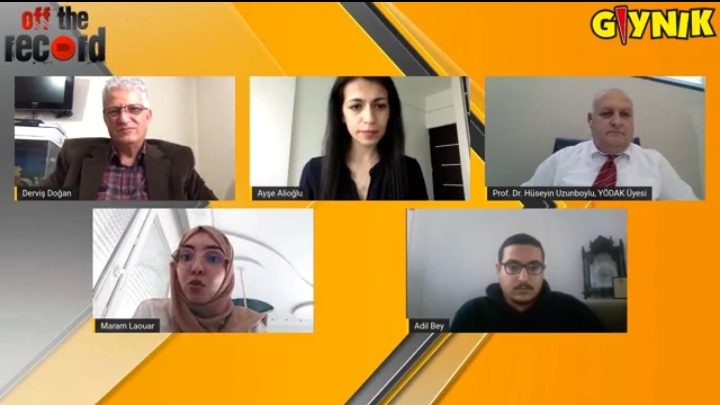